Finance’s role in telling stories with data: An Off the Ledger LIVE! discussion. 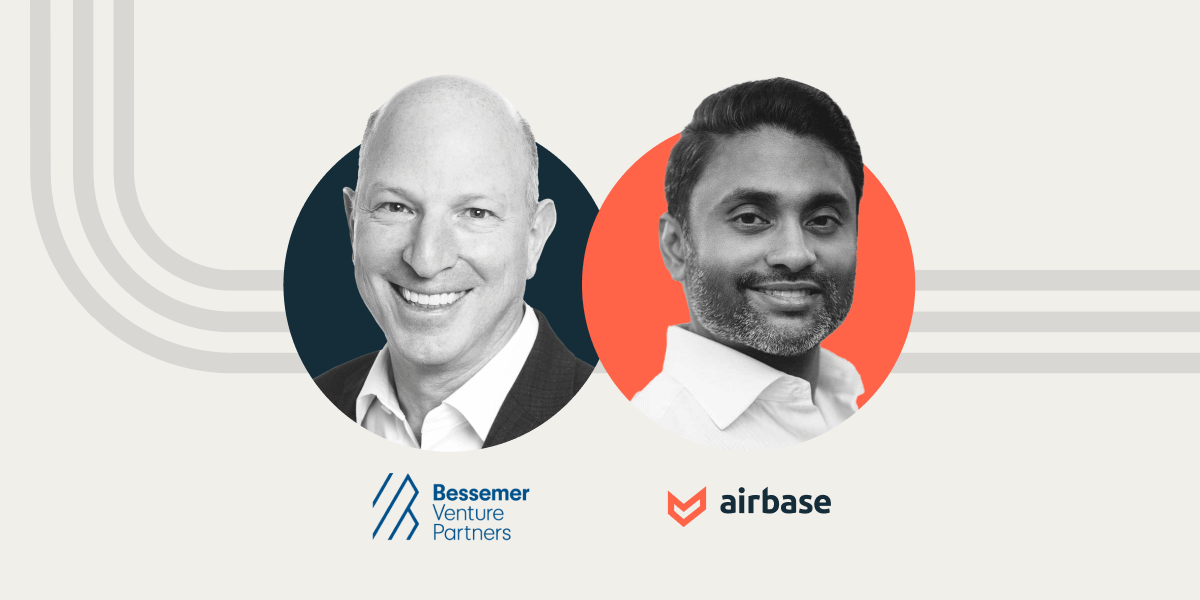 Data can create and even change a story — this was a key theme in a conversation between Jeff Epstein, Operating Partner at Bessemer Venture Partners, and Aneal Vallurupalli, CFO at Airbase. In this session of the Off the Ledger LIVE! virtual conference, Jeff, who also served as CFO at Oracle during its formative years, began with a story. A subscription-based product he considered investing in had high and rapidly growing revenue numbers, which told a very promising story. But looking a little deeper, his team discovered that very low usage statistics suggested that revenue growth would not continue because customers weren’t likely to renew their subscriptions.

Fittingly, their session contained many such stories about lessons learned through data.

Aneal shared a story where board resistance to an acquisition was overcome by demonstrating the value that would accrue over time. “Uncovering the data is important because the first thing you look at may not ultimately be where you land. Doing the digging can help you support a thesis as it did in this case.” Jeff pointed to another acquisition story example. In its very early stages, Booking.com experienced positive usage, but the company had run out of cash. Data analysis showed that the company was spending money on advertising, but returns wouldn’t show up until many weeks later when people actually paid for the accommodation they booked as a result of the ads. A deep dive into the data helped the investors recognize that, in spite of its cash position, the company was a great deal and now it’s the biggest booking company in the world.

Communicating data: The art of storytelling.

Beyond the story itself, determining effective ways to communicate the data is important. “The natural way for humans to communicate is with a story, with a beginning, a middle, and an end. You have characters, you have conflict, you have controversy and suspense, and then you tell the punchline,” said Jeff. “But that’s not what you want to do at a board meeting. They want the punchline first.”

Jeff suggested considering the newspaper model: A headline, which for some audiences is all they may ever want, followed by the lede or brief key takeaway, and expanding details for those interested in understanding more.

“A mistake I see a lot of people make early in their career is that when they’re excited about something, they want people to come along the same journey of discovery they did. But, they’re missing the opportunity to just give the punchline.”

Aneal emphasized that explaining what that means and why it is important is essential. “Have the slide title just be the takeaway, lead people to the takeaway quickly versus having anyone around the table interpreting the data. Each executive and board member has a different superpower, a different skillset, which means they likely take something different from data if you just provide data to them. Being able to tailor information and make it digestible for a wide swath of skill sets is super important,” he noted.

Gathering data to support the story.

‍Both speakers emphasized that the data must be structured in a way that tells the necessary stories to support a data-driven business. The ability to generate that kind of data requires some initial work and planning from the onset. It’s not enough to simply collect all the data a company generates and hope people can find what they need.

“The key is to make data useful,” Jeff explained. “What are the questions people will ask about the data? If the same kind of question gets asked repeatedly, you want to automate the process to get the answer.”

The database can then be structured to give the key information people need.

Aneal gave the example of a customer success team wanting to examine retention rates. The metrics needed could be data on usage rates, and other data points that could act as leading indicators and drive daily decisions. “It’s one thing to architect the systems to provide data, but it’s a very different thing to build the muscle memory of the company to be data-driven,” he said. When that muscle is strong, data can be leveraged across an organization. Product leaders, for example, could point to data as the rationale for implementing a new feature.

Jeff pointed to the importance of anomaly detection, particularly in relation to understanding customer success, and why different segments of customers behave differently. Understanding “all the variables that go into one group of customers using your product frequently and another group of customers churning is very valuable.” Here again, Jeff provided a story. “When Facebook was very young, they realized that some people signed up for Facebook and didn’t use it very much, and others signed up and used it all the time.” They discovered that the difference was the number of friends that a user had, so they created a metric around how many friends each new user would invite or connect with.

“Every company has a key metric like this,” he said. “You need to figure out what your company’s is.”

Of course, in the early stages of a company, a small finance team simply doesn’t have time to pour over data. Simplifying data collection then becomes paramount. “If it takes 10 hours to get the data, you have less time to analyze it,” Aneal said. “The goal is to reverse that ratio.”

Jeff outlined some basic strategies for setting up actionable data collection by cleansing the data. A key first step is developing definitions for crucial elements of your business. He gave the example of Larry Ellison asking how many employees Oracle had, and getting an answer that it could vary by thousands depending on the definition of “employee.”

Aneal agreed on the importance of definitions, pointing out that it’s common for “active user” to be defined differently across an organization. Finance, he said, can play an important role in shaping those definitions.

“Which metrics define success? Then figure out how you refer to them.”

The role of finance.

As stewards of financial data, the finance team has the opportunity to help the rest of the organization understand the “why” behind business patterns. Aneal asked Jeff about data architecture to ensure access to the information needed. Jeff responded, “Ideally, you have all the data in one place and look at high-level metrics, then drill down to understand what is the underlying factors going into it.” Jeff expressed some skepticism about some of the more complex predictive models that are increasingly relied upon for analysis. “If I’m told we have all these inputs and I can’t tell you if this particular input was, say, 25% of the causality, that’s always worried me.”

The availability and complexity of data shifts as a company grows. Aneal pointed out that in the seed stage, companies typically look ahead month to month, but, at each stage, that view gets further into the future, with Series C and D companies ideally looking a few years out. The processes for data collection should be able to support the long view from the onset.

Jeff talked about the different types of data usage. One is trying to figure out why something happened, while another is just exploring the data to see what can be extrapolated, which requires more sophisticated data analysis skills.

In Aneal’s experience, the “why” questions are often raised by finance. He talked about a push/pull dynamic, in which finance often starts by pushing the rest of the company by asking questions about the data they need, but, over time, the company pulls finance into the discussions to provide value through data.

Aneal posed his final question to Jeff: How can finance best use their data to serve their company? Jeff’s reply provided an excellent summary:

“The CFO is the service provider to the business units and the other functions. When I was CFO, I would ask other business leaders what they needed. Importantly, I would ask, What questions have you stopped asking because we didn’t have the data? And then build the data infrastructure to answer those.”

Watch the complete Off the Ledger LIVE! session.